F, b. circa 1540
Johanna Van Scherpenzeel was born circa 1540. She was the daughter of Johann Von Scherpenzeel and Gerberich Von Bentink. She married General Peter Schenk Van Nydeck, son of Derick Schenck and Anna Van Belaer, on 17 May 1580 at Doesburgh, Netherlands.

M, d. between May 1487 and August 1487
Diederick Schenck Van Nydeck was the son of Henrich Schenck Van Nydeck and Aleide Van Keldenbrock. He was Lord of Afferden & Blyenbeck and half of Walbeck. He married Adelheit Von Buren, daughter of Johan Von Buren and Alheid Von Arendahl. He was Marshall of the Duke of Cleve in 1442. He died between May 1487 and August 1487 at Mai, Netherlands.

M
Henrich Schenck Van Nydeck was Feoffer of Wachtendonck. He was a knight, Lord of Afferden & Walbeek. He married Aelide Rayde. He was the Head of the family in 1346.

Children of Margaret (---) and Benjamin Chesney

M, b. circa 1740, d. 1800
Caspar Everly married Sarah (---). He was born circa 1740. He was paid for road work in Maryland, during Western Expedition by Brigadier Forbes, Colorado, Bouquet and Liuetenant St. Clair on 7 August 1758.5 He was on tax rolls for Old Town Hundred, Fredrick Co. MD (now Alleghany Co) in 1761. He was one of the first settlers of Monongalia Co, Va. He settled on 500 acres, on the west bank of the Monongahela River, just south of the PA line, at the current town of West Van Voorhis. He gave supplies to the Continental Army.6 He served 131 days in the Revolutionary War, under Captain Scott.7 He gave a disposition from his home, as a witness in a land dispute on 16 March 1799 at Monongalia Co, VA..8 He died in 1800 at Monongalia Co, WV..

Children of Caspar Everly and Sarah (---) 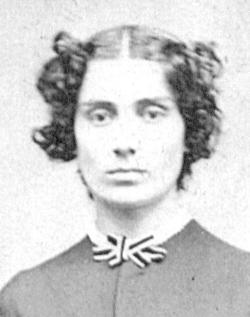 Celestia A. Burch was born on 14 November 1843 at Cayuga Co, NY.. She was the daughter of Carolus Horace Burch and Nancy Henrietta Jones. She married John Henry Moore on 1 April 1864 at Marshall, MI..7 She died on 8 December 1888 at Britton, SD., at age 45.
Several of her family letters have been preserved. She wrote to her brother Charles while he was serving in the Civil War. She wrote several family letters, while living in a sod house, homesteading in South Dakota. The letters give a glipse of the hard life of homesteading.
(Click on the icon to view transcriptions.)

Children of Celestia A. Burch and John Henry Moore