Robert Hickman was born circa December 1772 at Burlington Co., NJ.. He was the son of Samuel Hickman and Nannie (---). The earliest record of Robert Hickman is the 1790 census for Cumberland Township, Washington County, PA., which is present day Greene County, PA. In the 1798 Direct Tax, he was listed as living adjacent to Bailey Johnston, near the head of Frosty Creek in Greene County, near the intersection of Whiteley, Jefferson and Greene Townships.
According to his tombstone ("Oct. 29, A.D. 1842, aged 69 years 10 mo."), Robert would have been born in December 1772. However, three census records show him older: 1810 Census born prior to 1765 and 1830 & 1840 Census born prior to 1770. His birthplace is unknown, however two of his children reported in the 1880 Census that their father was born in New Jersey. No documents have been found to prove his ancestry. However, extensive research of documents point to the fact that he was the son of the Samuel Hickman.

He married Mary Magdalena Livengood, daughter of Johan Peter Livengood and Ann Eva Linderman, circa 1788. Church records show that Mary Magdalena was born on December 4, 1756 and baptized on March 20, 1757 at Hanover Lutheran Church, Falkner's Swamp, now Montgomery Co., Pennsylvania. She was the daughter of Peter Livengood and Anna Eva Linderman. Peter was the son of Hans Jacob and Ann Margaretha Lowenguth. Mary Magdalena came with her parents to present day Greene County, Pa, about 1784. She died August 25, 1838 in Greene County.

The only Church record of Robert and Mary's family is the baptism of their second daughter, Elizabeth. It is recorded on May 7, 1793 at Jacob's "Old Dutch" Lutheran Church in German Township, Fayette County, Pa. Many of Mary Magdalena's relatives lived near this church and had their children baptized there.

As were most residents of early Greene County, Robert was a farmer, living off the land. In the tax records of 1817-1819, he is also listed as a "carpenter." His skill in carpentry must have been notable, as the occupation of carpentry was passed down through many of his descendants. Robert was successful in his life, as he expanded his homestead, by purchasing property of his adjacent neighbors. He owned a total of 97 acres in 1842.

Greene County Court records show that Robert was a frequent party in lawsuits over the years. In particular 1805-9, he was involved in seven different cases. The reasons for the lawsuits are unknown, except for two. In August 1805, Robert sued John Renner for assault and battery on his daughter, Nancy. In February 1807, James Corbett sued Robert and three other neighbors for "assaulting, beating, and false imprisoning."

He lived the rest of his life on the Hickman farm at the top of Frosty Run, Greene Co, PA. After his death, the land was owned by the Murdock family. Joseph Murdock (1843-1927) lived in the two story Hickman log cabin and his two sons, Harry and Arleigh were born. The cabin was eventually used as a barn, until it fell into disrepair. Click here for photos of Hickman homestead.3

He died on 29 October 1842 at Whiteley Twp, Greene Co, PA..
He wrote his last will on September 3, 1841. It states in part: "...I give and bequeath to my grandsons Jesse and Morgan Hickman, sons of my son Samuel Hickman, two tracts of land in Franklin Township...My will is that my said son Samuel shall have free access and support of the two tracts...by making use of the means of industry of the same...I direct my Executors...to sell...all the tracts of land where upon I now live...the proceeds to be equally divided amongst my heirs...I also direct that the...value thereof (two tracts of land in Franklin Twp.) to be deducted out of my son Samuel's share, the residue as my other heirs, viz: Abraham, Nancy, Elizabeth, & Casander...I also order...to deliver to my son Samuel free of cost or charge all my wearing apparel...I order... to have around my wife as well as my own grave, if not sooner done, a suitable & sufficient stone wall as well as headstones..." The receipts filed in Robert's estate papers are the following heirs: Hiram Nichols & wife, James Vandruff, Samuel Hickman, Elizabeth Renner, and Aba Hickman.

M, b. 1847
John W Phillips was born in 1847 at Greene Co, PA.. He was the son of Elmore Phillips and Elizabeth Vandruff. He married Mary Ellen Merriner. He left Jackson Twp, per tax records in 1884.

Children of Edith A. Renner and Edward S. Stephens 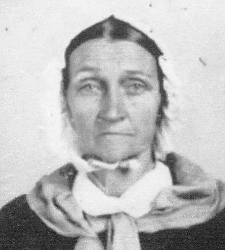 Hannah Smith
Hannah Renner was born in 1819 at Whiteley Twp, Greene Co, PA.. She was the daughter of Barnet Renner and Elizabeth Hickman. She married John Smith.