Children of Robert R. Renner and July A. Haines

Children of Robert R. Renner and Francis A Leaman

Samuel Hickman was born circa 1795 at Greene Co, PA.. He was the son of Robert Hickman and Mary Magdalena Livengood. Samuel served twice in the War of 1812. First, he served as a Private in Captain William Harper's Company of Infantry, 1 Regiment Pennsylvania Militia, from October 2, 1812 to April 15, 1813. After the burning of Washington D.C. by the British, he served as a Private in Captain Levi Smith's Company under Major Mitchell's Pennsylvania Volunteers, from November 10 to December 4, 1814.
Samuel first appears in the tax rolls of Whiteley Township, Greene County, as a "singleman" in 1816, probably working and living on his parent's farm on Frosty Run. In 1819, he worked for Jesse Hammers making iron ploughs. He is listed on the annual Whiteley Twp tax lists through 1822 when he is listed as "removed" on the Whiteley Twp tax lists. He is not listed on any Greene county tax lists until the fall of 1828, when he reappears in the Whiteley Township tax.
He married Elizabeth (---) circa 1823. In the 1830 Census, he is listed adjacent to the Shriver families in Whiteley Twp. Very little is known about Samuel's wife. We know her first name was Elizabeth, based on the following notice Samuel placed in the Sept 1, 1834 Waynesburg newspaper. "NOTICE. I hereby forwarn all persons against trusting or harboring my wife Elizabeth, as she has left my bed and board without just cause or provocation; and I herefore determined no debts of her contracting after this date." According to family recollections, Elizabeth left Samuel and the children when they were still young. In 1835, Samuel moved onto the 15 acre parcel in Franklin Township, that was owned by his father. Her son, Morgan, is said to have attempted to visit her later in life, but that he was dissuaded in order "not to stir up old hurts."
Samuel's only trade was a blacksmith. He did not live a prosperous life. In the 1833 tax record, his daughter was listed as a "poor child" needing County Assistance for her schooling. When his sons grew up, he lived with them, his occupation being listed as "day laborer." In the inventory of his estate, there was only the bare essentials plus a shotgun and shoe making tools. When his father died in 1842, Samuel inherited his father's clothing and only the use of the 15 acres in Franklin Township, which was specifically willed not to Samuel, but his two sons.
In 1851 and 1856, Samuel received two military bounties of 80 acres each, for his service in the War of 1812. As was common practice, he stayed in Greene County and sold his bounties of property in Iowa and Wisconsin to others willing to travel further west. In 1854, he purchased 22 acres on the Whiteley and Jefferson Township border, adjacent to his father's old homestead. He lived there for the rest of his life.
He died circa January 1862 at Greene Co, PA; There is no record of his death, but the proceedings for his estate began on February 7, 1862.

Children of Samuel Hickman and Elizabeth (---)

F, b. 1825, d. 28 February 1888
Christina Hickman was born in 1825 at Greene Twp, Greene Co, PA.. She was the daughter of Samuel Hickman and Elizabeth (---). Christina was often called by her nickname "Tina." When her parents separated, her mother moved away and remarried, so Christina was probably raised by her father. The family was evidently poor as she was one of the six poor children of Franklin Township, whose schooling was paid by the County in 1833.
She married Benjamin Knisely, son of John Knisely and Elizabeth Yeater, circa 1845.
(The surname "Knisely" was sometimes spelled "Nicely".) Their first son was born about 1846. Christina, Benjamin and their children are listed together in the 1850 and 1860 census of Wayne Township, Greene County. 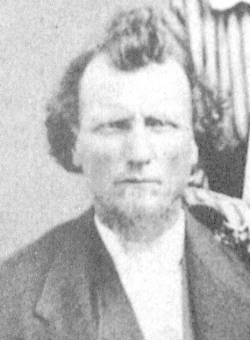 
Morgan's parents separated when he was young and he was raised by his father in poor surroundings. In the 1850 Census, he is listed living with his brother Jesse. He apparently moved away from Greene County, PA, as he does not appear on any Greene County tax list until 1860. Where he lived during his twenties is unknown but according to Mary's application for a widow's pension, they were married on June 5, 1857, "Pulased" County, IL., by Esq. Mansfield. During that time period, Col. Mansfield toured the US military forts, as an Inspector General. By the time of the 1860 Census, Morgan and Mary were living back in Greene County with his father and brother.
Morgan was a carpenter by trade. For the next 22 years, Morgan lived on a 22 acre parcel of land in Jefferson and Whiteley Townships, Greene County, which he eventually inherited from his father.
Morgan served as a private in the Civil War, enlisting on September 8, 1862, in Company C, 18th Regiment of Calvary, Pennsylvania Volunteers. In the winter of 1862, they drilled and camped just west of Washington D.C. in log cabins with shelters for their horses. After frequent scouting assignments, the 18th Calvary participated in the battle of Gettysburg in the summer of 1863. At the end of the battle, the 18th Calvary followed and harassed the Confederate Army, riding and fighting for 48 straight hours. It was at this point, that Morgan Hickman left the 18th Calvary, being listed as a deserter on July 4th, at Emmitsburg, MD. When he filed for a pension in 1883, he stated that he had been ill with yellow jaundice at the time.
Where he lived during the time of his desertion is unknown. He is not listed in the tax records in Greene County in 1863, 1864 and 1865. If he lived in Greene County, he hid from the tax assessor as well as the Army's General Provost.
In April 1865, President Lincoln issued a Presidential pardon for all those who had deserted, and Morgan returned to the U.S. Army on April 27. He then mustered out on July 10, 1865, at Fairfax, VA., receiving an honorable discharge.
In 1882, Morgan sold his 22 acres in Greene County, PA. and moved south to Glover's Gap, Marion County, WV.
About 1884, Morgan and Mary adopted a ten year old boy, "Archibald." Archibald was born with the name "Otto", in the Greene County Poorhouse on Dec 30, 1873. He was the son of one of the unwed daughters of Morgan's sister, Christina Niceley, who lived in the Poorhouse.
In 1890 he returned to Greene County, PA. buying 32 1/2 acres, in Jefferson Township. Morgan and Mary lived their last years in poverty, with doctor's bills reducing the equity on their property. They relied on financial assistance from Morgan's nephew, William Riley Hickman.
Morgan died at his home on Sunday, March 29, 1896, after a 18 month long spinal illness. He was buried the following day at the Public Cemetery of Morrisville at N.188 E.78. His wife Mary died 21 May 1897 and was also buried in the Morrisville Cemetery.
Morgan and Mary had no children, other than their adopted son Archibald Hickman. Archibald married Matilda May Funk and they lived in Jefferson Township until 1917, when they moved to Washington, Washington County, PA, where they worked in a glass factory.

Children of Cassander A. Hickman and Hiram Nichols

Children of Robert H. Nichols and Rachel A. Spragg