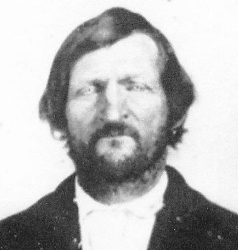 John Smith
John Smith was born in 1822 at PA. He married Hannah Renner, daughter of Barnet Renner and Elizabeth Hickman. He died on 18 December 1897 at Wetzel Co, WV..5

Children of Francis A Leaman and Robert R. Renner 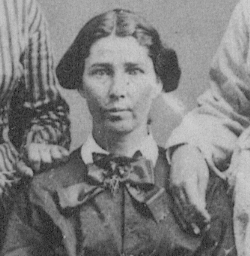 Mary Parrott Hickman
Mary Eliza Parrott was born circa 1834 at NC. She was the daughter of Thomas F. Parrott and Susan Evans. She married Morgan Hickman, son of Samuel Hickman and Elizabeth (---), on 5 June 1857 at Pulaski Co, IL.. She died on 21 May 1897 at Jefferson Twp, Greene Co, PA.. She was buried at Morrisville Cemetery, Greene Co, PA..
(Comment: Mary's parents are probable, but not proven. In the 1870 Census, her birth place is listed as North Carolina. In Morgan's pension application, they reported that they were married in "Pulased Co, Illinois," by Esq. Mansfield, June 5th, 1857. Information passed down from Willa Hunter is that Morgan Hickman went west and married and returned to Greene Co, PA.
[There was a Major Mansfield in the US Army, who after the Mexican War, was an Inspector General, a job that required to visit fortifications in all parts of the country.])
(Comment: About 1884, Morgan and Mary adopted a ten year old boy, "Archibald." Archibald was born with the name "Otto", in the Greene County Poorhouse on Dec 30, 1873. He was the son of one of the unwed daughters of Morgan's sister, Christina Niceley, who lived in the Poorhouse.
In 1890 they returned from Wesr Virginia to Greene County, PA. buying 32 1/2 acres, in Jefferson Township. Morgan and Mary lived their last years in poverty, with doctor's bills reducing the equity on their property. They relied on financial assistance from Morgan's nephew, William Riley Hickman.)

Children of Hiram Nichols and Cassander A. Hickman