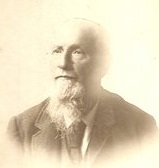 Eli Estle
Eli Estle was born on 20 July 1834 at Greene Co, PA.. He was the son of Matthias Estle and Mary Stewart. He married Rachel King. He married Mary Ann Dulaney in 1867. He died on 20 November 1910 at Greene Co, PA., at age 76.10 He was buried at Estle Cemetery, Jefferson Twp, Greene Co, PA..11
(Comment: Mr. Eli Estle departed this life November 20, 1910, at nine p. m., aged seventy five years and four months. Mr. Estle’s entire life was spent in Jefferson Township On the old homestead where he died. He was the son of Matthias and Mary Stewart Estle, and was of a family of eleven children; four sisters and seven brothers, the only surviving member being John, of Homeville. He was twice married, his first wife was Miss Mary King from which union there survives but one child; Mrs. Anna Daugherty of Sugar Grove. His second wife was Miss Mary Dulaney, and to this union there was borne one son, T.R. Estle who resides on the home place. Mr. Estle was a man who was held in the highest esteem by all that knew him. He was honest, industrious, and inoffensive. He possessed a most pleasing demeanor, believing in justice and honor; and his daily life was a living example of those lofty principles. His ideal was to be in harmonious relations with everyone, and he would suffer sacrifices rather than perform an act that would disrupt the amicable relations that existed between himself and his friends. About two years ago he experienced a slight stroke of paralysis from which he never recovered. In all his sufferings he was patient and cheerful, never once taking a gloomy view of life or death. A few days before he died he expressed a desire to depart; “I want to go and be at rest,” were the words of this noble citizen. While he was not a professing Christian it seemed that the teaching of Christ had taken a hold on him, for he was trying to live according to the great rule of the Savior, “As ye would that men should do to you, do ye even so to them.” The funeral was conducted at the home November 22, by Rev. A.T. Carr, and the body was placed to rest in the family burying ground.